Rest as needed then,

Rest as needed then,

As Many Repetitions As Possible in 1:00 of

Note: This is a three tiered workout focusing on different metabolic demands and athletic modalities. Review of all skills, especially the Wall Walker, will take place during each class. 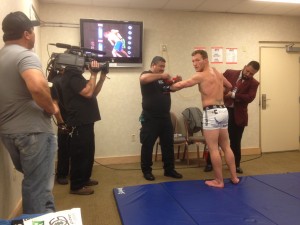 “It is not the critic who counts; not the man who points out how the strong man stumbles, or where the doer of deeds could have done them better. The credit belongs to the man who is actually in the arena, whose face is marred by dust and sweat and blood; who strives valiantly; who errs, who comes short again and again, because there is no effort without error and shortcoming; but who does actually strive to do the deeds; who knows great enthusiasms, the great devotions; who spends himself in a worthy cause; who at the best knows in the end the triumph of high achievement, and who at the worst, if he fails, at least fails while daring greatly, so that his place shall never be with those cold and timid souls who neither know victory nor defeat.” ― Theodore Roosevelt

We are so inspired by our friend Gray Maynard. Although  UFC 167 did not end as hoped, Gray still has the eye of the tiger and is hungry for another battle. Training started as soon as Gray returned to Santa Cruz. It takes tremendous courage to engage another trained opponent in hand to hand combat in front of thousands of spectators and millions of worldwide viewers. Thank you Gray for teaching us that being a warrior does not mean you never get knocked down: It means you ALWAYS get back up. We love you brother.