During the first Golf War, a young Marine Lieutenant received word that his Platoon would advance across the desert at daybreak. This was a task he was prepared for, yet feared. There was absolutely no cover or concealment across the vast open desert. His Platoon would be visible to the enemy and an easy target for a machine gun.

That night, the Marine Lieutenant lay awake and prayed to God.

“Please God, keep my men safe. Watch over my men. If anyone must fall in tomorrow’s battle, let it be me.” 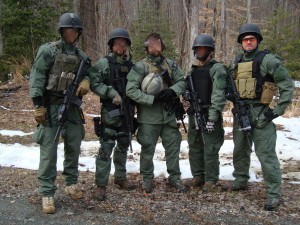 Suddenly, the normally starry and clear nights became overcast, and a light rain started to fall upon the dry desert land. The light rain became a steady downpour, to the amazement of the Marine’s on the  ground. This was the first time their Platoon had encountered anything but a hot and dry climate.

The Marine Lieutenant radioed to other Platoons along the border to inquire about their conditions.

“Is anyone else getting poured on?” Asked the Lieutenant.

“All clear and dry along our sector.” Came back the reports from other Officers.

Astonished, the Lieutenant took the rain as a sign his Platoon was doomed.

“Why God, would you rain on my men, the night before our battle?”

In the morning, the sun came out, and the desert sand quickly became dry. As the young Marines prepared to advance across the border onto the vast and open desert, they all noticed what appeared to be glistening discs along the surface of the sand.

The torrential rain had uncovered an Iraqui mine field. Had the rain not come, the Platoon of Marines would have walked into an enemy kill zone.

“Thank you God, for keeping my men safe.” Prayed the Lieutenant.

His prayer had been answered.