‘Stand still’ – keep the posture of an upright man, ready for action, expecting further orders, cheerfully and patiently awaiting the directing voice; and it will not be long ere God shall say to you, as distinctly as Moses said it to the people of Israel, ‘Go forward.’

A few months before he was to be deployed to Vietnam as a Navy Officer on a thirty-one foot Navy River Patrol Boat, my dad severely injured his right eye during a Naval scuba diving accident in San Diego, California. As a result of his injury, his position as Commander of the boat and four men was forfeited to another Naval Officer. Three months after arriving in Vietnam and starting to patrol the dangerous waterways of the Mekong Delta, the boat my dad would have commanded was ambushed by an enemy platoon. Everyone on the boat was killed. 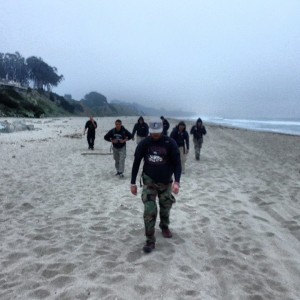 My dad told me that for many months he was deeply depressed. He believed he should have been on the boat, and thought his presence could have saved the lives of his men. Only through prayer and forgiveness was he able to transcend the loss of his friends, and his feelings of failure, anger, guilt, and grief. However, at the moment of forgiveness, a brilliant light opened in his heart and mind. Only a few short weeks later, my dad met my mom, and the beginning of their thirty-year relationship, including my birth and the birth of my brothers, began. My dad went on to become a Doctor of Chiropractic with one of the most successful practices in the country. He developed and taught a form of Chiropractic care based on the tenants of spirituality and forgiveness. At his burial service on August 26, 2000, at Presentation Church in Stockton, California, there were over two thousand people in attendance, many of whom I never knew.

The lesson my dad taught me through his life experience was immense, and has helped me through many of my own challenges. Our life circumstances, in the moment, may sometimes appear to overwhelm us. It is in these moments we must learn to retain faith in ourselves, in other people, and most importantly, in our God. In addition, we must remember as those before us have taught, that our thoughts about what happens in our life are far more important than what actually happens.