The Parable of the Starfish and the Old Man

One morning a young man was walking along the sea-shore after a horrific storm. The beach was strewn with seaweed, drift-wood, and debris. The young man thought to himself;

“This has been such a terrible and powerful storm.“ 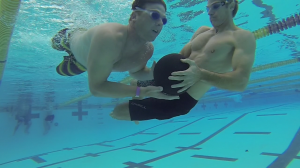 As the young man continued to walk, far in the distance, he noticed an old man, who despite his age, seemed to be dancing along the shore. As the young man drew closer, he saw the old man was picking up starfish from the sand, and throwing them back into the ocean.

“What are you doing?” The young man asked the old man.

“The sun is going to come up soon, and the tide is going out. If I don’t throw these starfish back into the ocean, they are going to die.” Replied the old man.

“Silly old man, you cant possible make a difference. There are thousands of starfish washed up on the beach.” Laughed the young man.

The old man smiled a wise smile, then bent down and picked up a starfish. With all his strength, he hurled the starfish far out into the blue ocean.

“Well sonny, it made a difference to that one.” Said the old man.

With these words, the old man continued in his efforts to save the lives of the starfish, one at a time. The young man, greatly moved and influenced by the old man, started to do the same.

In the distance, a young woman was walking towards them, wondering why two men were dancing among the waves.

What influence do we have? Are we able to change the tides of our life, and direct the currents in the lives of other people?

The Warriors Code dictates that we are responsible, despite the odds being stacked against us, to serve and support other people. The Warrior believes every life is worth saving. The Warrior knows their influence can start universal momentum that has the power to change the world.